New Zealand is currently at RED on the COVID-19 Protection Framework.

The City of Nelson Civic Trust supports the development of cultural, artistic and social amenities in the city, and the preservation of historic landmarks.

Over the last 40 years, an exciting and diverse array of projects has been funded with donations totalling $800,000 made by the City of Nelson Civic Trust. More recent initiatives are additions to floodlighting of the Nelson Cathedral tower, in the Queen's Gardens and of Fifeshire Rock; stained glass windows in the Nelson Provincial Museum and the Cathedral; an art sculpture and performance venue in the 1903 square, and interpretative panels in a number of locations of historical importance.  Long-established amenities include the Trevor Horne Heritage Trail, the South Street Historic precinct project and the development of the Foster property at Monaco as a public reserve. See a full list of Civic Trust projects.

The trust is an independent non-profit organisation. It was formed in 1973 as a result of citizens’ concerns about the demolition of the historic Nelson Provincial Council buildings in 1969. The Trust Deed created an independent entity that could attract donations to build up a fund to protect heritage buildings and promote projects to contribute to the enhancement of Nelson City and the enjoyment of its people.

In the ensuing years, the enthusiasm and energy of a rotating number of trustees, including several former mayors, established a firm financial base which enabled support for a range of valuable civic assets. 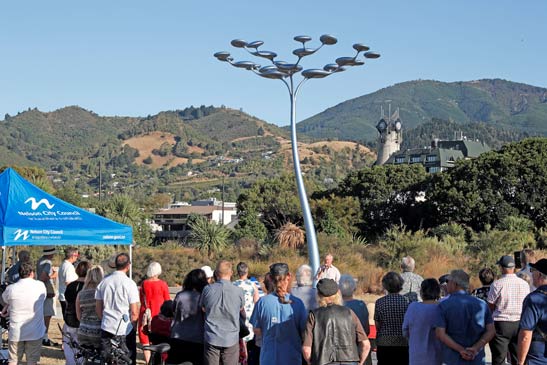 Unveiling of Family Tree kinetic sculpture, by Phil Price, on the banks of the Maitai River by Rutherford Park.