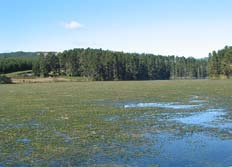 Hornwort is a vigorous, invasive, submerged, aquatic perennial found in fresh water down to 16 metres in very clear water, once used as an aquarium and ornamental pond plant. Lacking roots, Hornwort is often free-floating, although its modified base leaves can act as roots, anchoring the plant in sediment or around obstructions in flowing waters. The stems are up to 7 metres long, branched and brittle. The green, forked leaves with toothed edges are arranged in whorls of 7–12. The flowers are minute and no seed is set in New Zealand, but the stem fragments can grow to form new plants. It is considered to be one of the worst introduced water weeds in New Zealand.

It was introduced into the North Island in 1961; the first South Island infestation was found in the Moutere Stream in 2001 and it was subsequently found in a number of other freshwater ponds in the Tasman-Nelson region. An active campaign of eradication has been conducted by the Department of Conservation and Tasman District Council, with support from occupiers.

Hornwort grows rapidly and forms dense rafts of weed that can choke waterways, disrupting fishing, boating and other water-based recreational activities, affecting water intakes for irrigation and dams, and severely impacting on other aquatic organisms. It is spread by stem fragments; plants are easily transported to other waterways by machinery, boats, trailers and nets. It is difficult to eradicate. As such, it represents a major threat to South Island rivers and lakes, as well as to irrigation schemes and hydroelectric dams.

In the Tasman-Nelson region, prompt action by the Department of Conservation over a number of years, assisted by the Management Agency, appears to have eradicated it. Hornwort’s ability to regenerate from vegetative fragments means that intensive monitoring is essential. It is classified as an unwanted organism and the Management Agency is currently contracted by Biosecurity New Zealand to undertake surveillance. Biosecurity New Zealand is committed to its eradication in the South Island.

Hornwort is assessed at “2” on the infestation curve. It has been recorded in the Moutere Stream and in a small number of ponds on privately-owned land in Tasman District. The Management Agency is hopeful that it has been eliminated from these sites. The low incidence of Hornwort in the Tasman-Nelson region, extensive areas of suitable habitat, and the potential for it to cause significant adverse effects, mean the benefits of total control far outweigh the costs.

Prevention is the key to ensuring that hornwort does not become established in the Nelson region and the rest of the South Island.

To contribute to the eradication of Hornwort by ensuring that all known sites in the Tasman-Nelson region are inspected annually and any live plants are reported to Biosecurity New Zealand during the term of the Strategy.

The alternative option of “do nothing” or relying on voluntary control will not achieve the objective of eradication, and will result in significant additional costs to the community with respect to lost natural values and the increased cost of control in the future.

The Management Agency will work with Biosecurity New Zealand for the surveillance and control of Hornwort in water bodies. A breach of Strategy Rule 4.8.5 is an offence under Section 154(r) of the Biosecurity Act 1993.

No person shall knowingly sell, propagate, breed, release, or commercially display Hornwort, under Sections 52 and 53 of the Act.