(1854-1928) and (1887-1969)
Notable Women Walk
Euphemia 'Effie' Johnstone was born about 1849 Argyllshire, Scotland to Susanna Newbigging and her husband Robert Johnstone. Effie’s father had died by the time she was six years old, leaving her mother to run the farm. 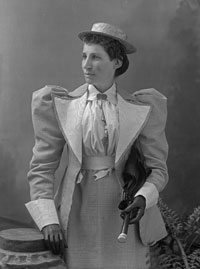 Euphemia 'Effie' Johnstone was born about 1849 Argyllshire, Scotland to Susanna Newbigging and her husband Robert Johnstone. Effie’s father had died by the time she was six years old, leaving her mother to run the farm.

In the early 1860s she emigrated to New Zealand with her mother and probably other members of her family. Her mother remarried in 1865 and died near Hokitika in 1883. Effie worked as a bar maid at some stage before her marriage in 1884 in Palmerston North to Ralph Richardson a solicitor.

Effie and Ralph Richardson had two children - Effie Louisa and Ralphine or Queenie as she was known to many Nelsonians.

Ralph died five years after they were married and his father, Doctor Ralph Richardson, sent for Effie and the girls who subsequently finished their education in France. During this time they lived off rents from various land holdings in Nelson including the Maitai run.

Ralphine became one of Nelson’s largest landowners. The Richardson’s landholdings were considerable and by the 1950’s included a 6,500 acre Maitai property, Tonga Island and additional land in the area now known as Abel Tasman National Park.

In 1908 the Effie and her two daughters returned to Nelson, after having been away for 18 years, and bought a property at the corner of Richardson Street and Princes Drive. Effie took control of the leases in the Maitai Valley as well as buying adjoining land which included riparian rights to the Maitai River.

Effie was involved in lengthy battles with lessees, local bodies, adjoining property owners and the public. Wandering dogs were shot and trespassers sent fleeing. The public who were used to swimming in the river were banned except for one area known as Big Hole. Various groups in the community regarded her actions as an infringement of their rights and the Nelson City Council petitioned parliament. After many years of battles land was bought and became a reserve for the Nelson public. 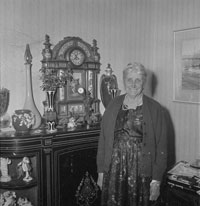 While Effie was occupied with protecting the families rights over their land farm management was carried out by Ralphine, or 'Queenie' as she was known. Effie died in 1928 and Queenie farmed the Maitai run until her death in 1969.

Ralphine eloped with the family groom a few years after their return to Nelson. An uncle was dispatched to Christchurch to bring the wayward daughter home. Ralphine immersed herself in the farm work and was well respected by her workers. She learnt to muster, hand shear and crutch the sheep.

Visits to Nelson were often on horseback in riding-breeches, riding astride, a habit which was not entirely approved by Nelson matrons. Although she or her sister never married, Ralphine adopted to male infants from Australia in 1937 and 1945. The children called Denis and Richard were brought up with the help of her close friend Miss D.A.Vercoe.

Richardson family papers and from sons Denis and Richards Richardson published in the Journal of the Nelson Marlb. Historical Societies vol.2. No.6. 1995.