As you drive into Nelson on the Atawhai side, there's a little slice of Japan offering a quiet place for a stroll or a spot of contemplation. The Miyazu Garden celebrates Nelson's relationship with its Japanese sister city. As soon as you walk through the gate made from old timber recycled from the port, the street noise is screened out with an immediate feeling of enclosure. Still reflective ponds, trickling bamboo spouts and melodic cascades enhance the sense of serenity. Doing a circuit of the garden from the entrance you come first to the Dragon Pond, overhung by Jim's Pine, a weathered and windswept 30 year old bonsai.

The peninsula symbolises the Boulder Bank which is a landscape feature similar to Miyazu¹s Amanohashidate. The contrasting textures of foliage, wood, water and rock pull the whole picture together.

Following the stepping stones towards the pondside pavilion you pass a stone basin used for ritual cleansing before the tea ceremony. The large flat stone beside the deck is called a shoe removing stone.

Crossing the three plank bridge, listen for the sound of the shishi odoshi, a kinetic fountain - originally used in gardens to keep wild animals out. Don¹t miss the view towards the century old camellia tree and rocky shoreline.

The main central path crosses over a mountain tarn pond with an alpine cascade.

Shakkei is the art of using scenery beyond the garden to enhance its beauty and increase the perception of size through the use of perspective. Three examples are; the view through the roofed gate to the Tasman Range, to the south to the Grampians and up to the tree covered ridge to the north east.

Taking the path to the Raupo Pond you pass Crane and Tortoise Islands, traditionally named after creatures which are revered in Japan as symbols of longevity. The Further on is the Yen abstract garden with raked sand - kept simple in design to encourage contemplation. The mounds beyond are planted with Japanese cherry trees - their flowering in Japan is an important herald of the spring.

Toilets are discreetly built into mounds to the south of the garden.

Nelson City Council has aimed to develop a garden of peace and tranquility which will be enhanced as the garden matures. 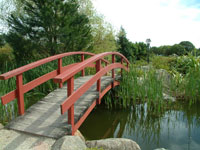 In late 2008 Council filled the base of the main pond with sand, the traditional Japanese material used to represent water. Water leaks in that pond had seen major drainage and significant cost to keep it filled. The still-settling land caused the concrete pond liner to break.

Now the pond has a layer of gold and creamy coloured dolomite sand spread over the base and raked in the Japanese style.

Find out more about the sister city relationship with Miyazu.